From the 19th – 25th June 2017, the Irish Universities Association welcomed a group of senior academics from a number of Central American universities and higher education stakeholders on an Erasmus plus co-funded project called HICA.

A highlight of the group’s two day Dublin visit was a reception held for them at Áras an Uachtaráin by President Michael D Higgins. Addressing the group in Spanish, the President said “In recent years, I have had the opportunity to support the growing links between the higher education sectors in Ireland and Latin America. […] The work you are doing to improve regional cooperation and integration will be critical to unlocking the potential of tertiary education in Central America. This is an area where Ireland and the European Union has been very successful, as the thousands of Irish students who have participated in the Erasmus programme and other such programmes around Europe can attest. […] I warmly congratulate you all for the work you are doing to contribute to the dialogue by expanding the horizons of our students, researchers and professors, for the benefit of all our societies.”

The HICA project, which stands for “Harmonization and Innovation in Central American Higher Education Curricula: Enhancing and Implementing the Regional Qualifications Framework (“HICA”) is coordinated by the University of Barcelona. Launched in November 2016 at the University of San Carlos in Guatemala this project intends to support the reform, innovation and harmonisation of HE curricula at the Central American universities based on the proposed qualifications framework for higher education in the region.

Sinéad Lucey, International Education Manager at the Irish Universities Association stated “the group visit was a milestone in advancing and deepening the internationalisation objectives of Irish Universities with Central and Latin American institutions, where significant and exciting partnerships and mutual learning opportunities exist”.

From Dublin the 40 strong delegation travelled to UCC to attend tailored workshops on Academic Standards and Programme development, Academic Development of Staff for Teaching & Learning, Academic Governance and Leadership Development for Staff. 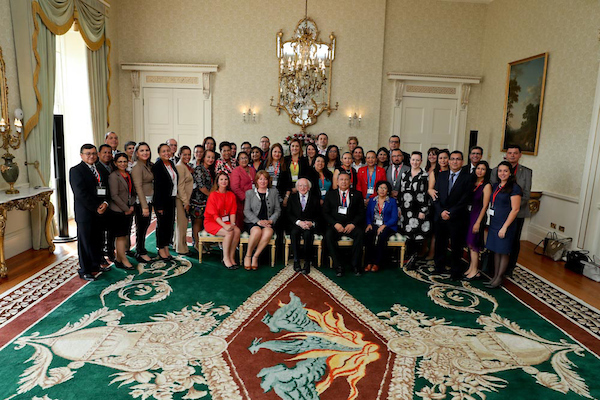