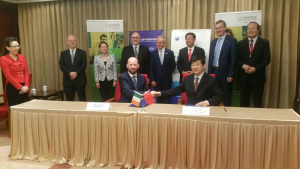 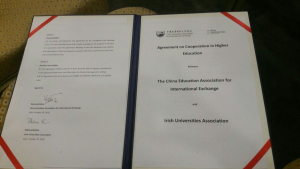 Senior representatives of 19 Irish Higher Education Institutions are participating in a week-long mission which was led by Richard Bruton T.D. Minister for Education and Skills, during the opening days in Beijing. The mission continues across a further three cities in China; Wuhan, Guangzhou and Shanghai and concludes on Sunday 30th Oct.

Addressing the China Education Association for International Exchange at the China National Convention Centre where Ireland was recognised as this year’s “Country of Honour” Minister Bruton said; “This education mission is part of the Department of Education and Skills plans to add €500million to the annual value of the international education system by 2020, and to double the numbers of Chinese students studying in Ireland in the next five years”.

While in China the Minister took part in a series of meetings and events, including a meeting with the Chinese Vice Minister for Education.

The number of Chinese students coming to Ireland has grown by an average of 17% in the last two years, and there are now over 3,300 Chinese students in Irish higher education institutes with a further 2,400 studying on Irish programmes in institutions in China.

Giles O’Neill, Head of Education in Ireland said, “progress over the last two years has been immense, with our teams in Ireland and China, the Embassy and our higher education institutes working together to deliver on an agreed plan. We have more Chinese students studying in Ireland than ever before, and more successful joint programmes. We are well positioned to increase student and staff mobility, and importantly, we have committed teams within our universities and colleges to make this happen.

The Education Mission also included a number of events to showcase Irish culture including a performance by Irish dancing group Meitheal, supported by Culture Ireland, at the opening ceremony for the 17th China Annual Conference for International Education, and at the opening of the Ireland pavilion on Saturday 3rd October 2016 in Beijing.
ENDS