In a 2020 survey completed by 6,026 students from 14 Irish HEIs 20% of female respondents think that verbally asking for sexual consent is awkward compared to 34% of male respondents

Sexual Violence and Harassment is a problem on higher education campuses and is under-reported. All higher education institutions are currently implementing a wide range of measures within the National Consent Framework. To help drive awareness and encourage conversation on consent the Higher Education Institutions, their Representative Bodies IUA and THEA, the Higher Education Authority, and USI are launching the #unmuteconsent campaign. The campaign seeks to mobilise the student community to make a difference, by speaking out, by enhancing their own knowledge about consent, and ultimately, by challenging and changing behaviours.

The campaign was informed by findings from The Union of Students in Ireland and the Active* Consent Sexual Experiences Survey (2020). This research is alongside significant work by the HEA, Higher Education Institutions, Union of Students in Ireland and other specialist bodies to research this area further and to inform students on the subject of consent.

“Since my appointment, I have worked with student representatives, staff representatives and our higher education institutions to ensure there is a zero tolerance approach to sexual violence and harassment. I am pleased that our students and management are working together to create a safe environment for all and to ensure that victims of sexual violence and harassment feel safe to come forward. We have to be leaders in this field. We have to change the culture on every single campus and we will.”

#UnmuteConsent will roll out across all Higher Education Institute campuses and the website www.unmuteconsent.ie will highlight the support, resources and training available in each university and Institute of Technology. 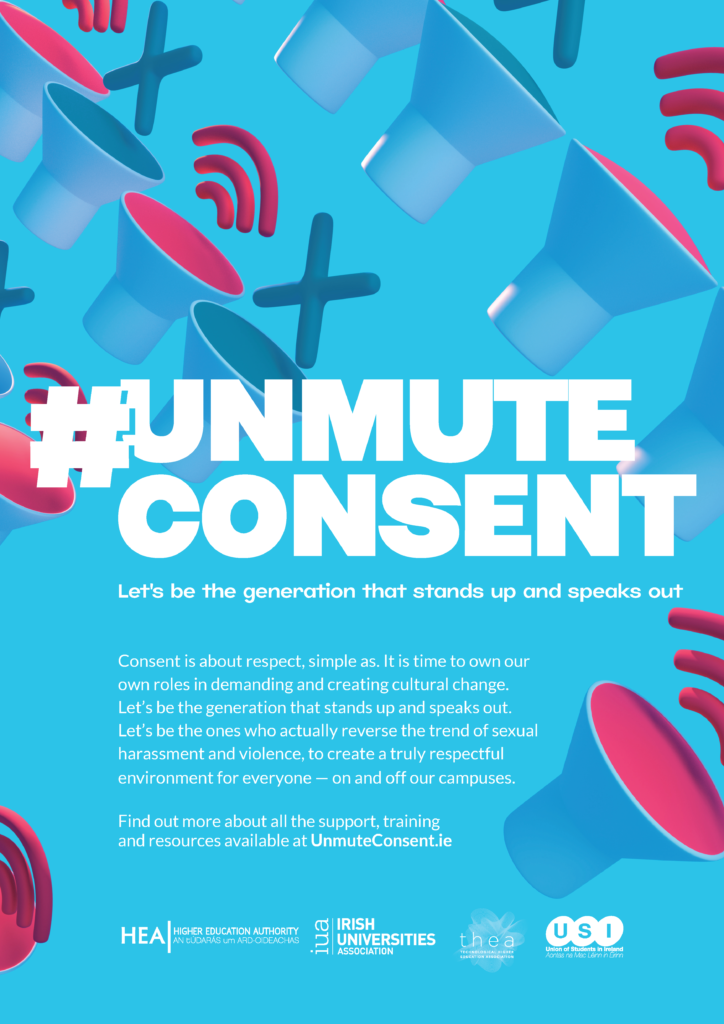 As students return to campuses around Ireland consent will form part of their induction process in addition to the tools and supports this campaign seeks to highlight.

By engaging with the support and training available in every institution, the campaign seeks to encourage students in:

Clare Austick President of the Union of Students in Ireland said: “It’s really positive to see a national campaign being rolled out in higher education institutions to raise awareness and build a culture of active consent among students on campuses. There have been many developments over the last few months in the areas of consent awareness and ending sexual violence and harassment on campuses, but we are still a long way away from fostering a zero-tolerance approach. The aim of this campaign is to empower students to talk about consent and contribute to the culture change we are hoping to see. I’m sure the #UnmuteConsent campaign will be a driver in helping us to do that.”

Speaking on the launch of #unmuteconsent campaign Professor Colin Scott, Chair of the IUA Vice Presidents of Equality, Diversity and Inclusion Group, said: “Sexual Violence and Harassment is a problem on third level campuses and across all strands of society in Ireland. The evidence indicates that incidents are under-reported. We know that there are comparable findings in universities in Australia, the US, and the UK. We want a safe and respectful third level experience for staff and students and know that a culture of speaking about consent can help transform how we as a society respond to unacceptable behaviour.”

HEA CEO Dr Alan Wall said as colleges reopen and students return to campuses, ‘it is important that we ensure that they are entering a campus culture that is safe, respectful and supportive’. “This campaign will help raise and maintain awareness of a critical issue in relation to our ongoing priority of ending sexual violence and harassment in higher education,” he said.

Joseph Ryan, CEO of the Technological Higher Education Association said: “ THEA, together with the HEA, the IUA and USI recognise the role we can and must play in creating, fostering and supporting a positive culture of consent. Through this campaign, we want to kickstart the conversation about consent, to normalise it, and to encourage our campus communities to actively increase their knowledge about consent.”

More information on the campaign can be found at www.unmuteconsent.ie

Links to the supports available in each of the participating HEIs can be found on www.unmuteconsent.ie

Sexual Consent is described as the freely given verbal or non-verbal communication of a feeling of willingness to engage in sexual activity. This description entails an ongoing, mutual and preferably verbal communication, and is consistent with the definition of consent in the Criminal Law (Sexual Offences) Act 2017, as where the individual “freely and voluntarily agrees to engage in that act”.

Statistics from the Active* Consent / USI Sexual Experiences Survey (2020) on attitudes, practices, and intentions regarding sexual consent are set out below. 6,026 students completed a survey as part of the research to provide a large national sample across gender, sexual orientation, and year in college.