The Presidents of Ireland’s  seven universities, represented by the IUA, have called on the Government and the national research funding agencies to urgently address strategic deficiencies in how Irish research is funded, following the outcome of the latest European Research Council (ERC) funding programme. Only one Irish-based researcher was funded out of a total of 408 grant awards from the €621 million funding programme.

National funding for primary research is well short of that in other countries. The Irish Research Council’s Laureate Awards that support investigator-led research are grossly underfunded. In addition, the Science Foundation Ireland funding programme for individual researchers run in 2016/17 has been replaced by a significantly reduced programme this year. The current programme is likely to provide funding to less than one in eight research applicants.

The limitations of national funding inhibits the capacity of our top researchers to secure external funding such as that from the ERC fund.

Professor Brian MacCraith, Chair of the Council of the Irish Universities Association and President of DCU said:

“In a week when some universities saw further slippage in international rankings it is clear that addressing research funding as part of an overall investment package for the sector is urgently needed. Ireland’s poor performance in this year’s ERC Funding Awards is a clear warning signal that demands urgent attention from government and the funding agencies.”

“As an island economy on the western edge of Europe, it is imperative that we have a world class university sector to compete effectively for international investment. Research plays an integral role in maintaining a world class system. We now have the highly regrettable situation where many of our top scientists and researchers are getting no national funding.  While only one Irish-based researcher received funding from the ERC, six Irish nationals located in other countries were successful.”

The Irish Universities Association supports the continued funding of applied or enterprise-focused research, but this must be balanced by increased prioritisation of investigator-led research.

The European Research Council is the European Union’s primary research funding agency. Its mission is to promote investigator-led research. For all ERC research grants, scientific excellence is the sole criterion of evaluation.

An economic study on the impact of the university sector in Ireland published by Indecon Economic Consultants in April 2019, confirmed R&D expenditure by Irish universities made a net contribution of €1.53 billion to the Irish economy in 2017/18. 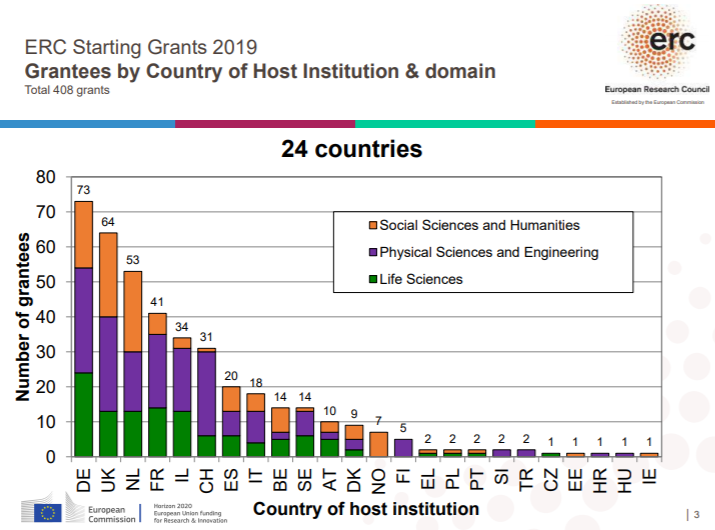